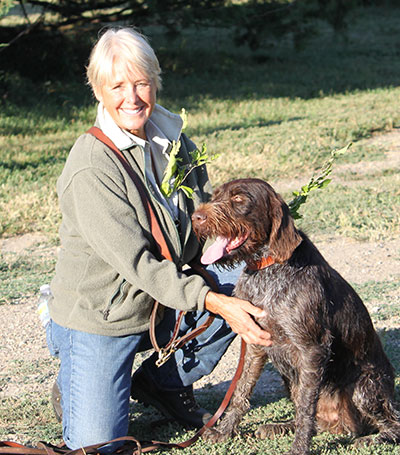 Lynda Franklin-Krull and her husband, Keith Krull, live in South Dakota and raise their Drahthaars at the vom tapferen Herzen Kennel on the 11,000 acre Krull family ranch. Lynda was introduced to the sport of wingshooting with pointing dogs by several of her brothers and family friends, who hunted English Pointers, English and Irish Setters, Weimeraners, and German Shorthair Pointers.

These memorable experiences helped set the stage for a lifetime love affair with hunting dogs which continues today, as she and her husband manage Krull Lodge, the family’s hunting operation in Harrold, South Dakota. Her first exposure to the Deutsch Drahthaar breed was in 1989, and over the years she has become a passionate and dedicated supporter of the breed. Lynda has tested dogs in over 25 sanctioned tests, including 2 dogs in the International Hegewald in Germany (awarded Best Coat and Conformation Male Title at the 1993 Hegewald in Magdeburg, and Best Coat and Conformation Female Title at the 2001 Hegewald in Ulm). Over the past 9 years she has developed a structured Drahthaar breeding program. Lynda is a JGHV Performance Judge and a VDD Breed Show Judge, and in these capacities has been called to judge in many states in the U.S. from New Jersey to Utah, as well as Canada and Europe several times.

Lynda is an ardent wingshooter who has hunted with her dogs in Europe, Mexico, Canada, and from Maryland to California for ducks, geese, pheasant, several species of quail, sharptail grouse, ruffed grouse, greater prairie chicken, chukar partridge and grey partridge. She has been featured in articles on upland hunting and dog training in Traveling Wingshooter, and Pointing Dog Journal, and has been asked to write an article for a national magazine on The Deutsch Drahthaar. Lynda has appeared in 15 television shows with her dogs including: A Dog’s Life, hosted by Jameson Parker; Benelli’s American Safari; Shotgun Journal with Chris Dorsey; Larry Csonka Outdoors; What the Dogs Taught Me with Scott Linden; Cast and Blast; and New Century Outdoors, many of which are currently airing on OLN and The Outdoor Channel.